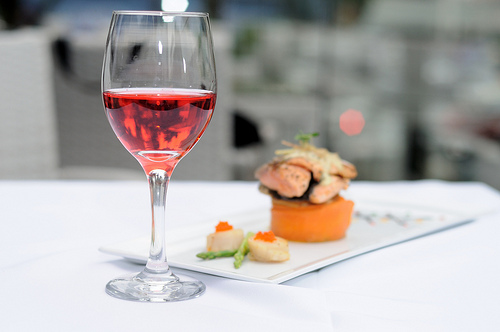 How Not To Conduct A Food Review

Once upon a time, there was a man. One day this man went to a restaurant and ordered some food. He liked the food very much, and took pictures of it. He then went home, posted up the pictures on his website and wrote all sorts of wondrous things about it for people to read.

Such is the story of many (if not all) food bloggers. It has always been about what we wish to share, on our own initiative, and at our own expense. However, the food industry has caught on and food bloggers have received plenty of attention from restaurateurs. Whether that has affected the quality of food blogs positively or negatively is debatable, but it doesn’t make it any less a fact: food bloggers get invited to food reviews at some frequency.

I’m no exception, though I rarely disclose this fact directly. While some may argue about my credibility in omitting a disclosure on this fact, the fact has never swayed my honest opinion. There have been several occasions when I had opted to not write a food review which I was invited to, because the food had been largely unexciting or just plain bad. This seemingly ungrateful act is an unspoken right I exercise to maintain the content of my blog as to my personal standards and preference. It’s a risk restaurateurs are forced to accept when inviting food bloggers for reviews; and I feel at least mildly bad, since the hosts have always been very gracious and generous. That is, until my last food review.

I was mortified by the experience. And I wasn’t the only one.

Dear restaurateurs, PR people, and representatives of food outlets, you must know that there’s a certain level of professionalism that needs to be exercised when conductive food reviews. It’s really quite common sense. We’re not being greedy, elitist, or demanding. You have to understand that most of us slogged to make ourselves present at your venue, have to pay for our own fuel and parking, have to bring our own usually-expensive equipment, and spend hours shooting and editing photographs; and that is before we decide whether we’re going to spend more hours writing up an honest review. Our time is not free, but we give it up in the name of our passion for food. Of course, it certainly helps that the food is free, but don’t let that give you excuses to call us greedy and demanding. We’ve been paying for our food and writing about it on our own accord long before you had the inkling of an idea to propagate free advertisement through our media.

Actually, it’s more like “Dear Ovo at Damansara Uptown”, but I figure their avalanche of blatant unprofessionalism need deserves a wider audience for reference purposes.

Everything seemed to be going well at first. I arrived at 6pm, along with a few others who were also able to rush to the venue in time. By Malaysian standards, usually half an hour is allocated for “arrival of guests”. Another half an hour was allocated to taking photographs of pre-prepared food. This format was planned perfectly, as the organizer (an innocent third party with no stake in the establishment, who was equally if not more outraged by the series of outrages that took place throughout the evening) had promised he would. However much of the other incidents would be beyond his management, as the restaurateur begins to screw us all over.

Though the actual dinner and tasting itself was to start at 7pm (an hour after the official start of the event), we were seated and served at about 8pm. As agitated as I was in my hunger (as I had eaten a relatively light lunch to compensate for dinner), I decided to pass it off as something that just couldn’t be avoided when preparing an array of dishes for our consumption. I distinctly remember the restaurateur telling me to seat myself in the VIP room and order whatever I wanted. So I ordered a stout. They sent me a bill for my stout. Now, it’s not that I had assumed that drinks were on the house, but it was a food review by invitation, and I was explicitly invited to order whatever I wanted. Imagine going to an open house during Christmas and then being billed for your beer.

Mystery of the disappearing oysters.

Next transgression came as they had asked whom among us would like to have oyster and who wouldn’t. After taking down numbers, they proceeded to not serve us any oysters, because they “didn’t have any”. Highly unusual that they would ask if we wanted any, then, and even more unusual that I managed to take photographs of at least fifteen oysters at the oyster bar.

While not being served with oysters, many of us had to repeat our drinks orders up to three times before it arrived. It wasn’t very difficult, if you ask me. What’s so difficult about getting a few soft drinks and water, I will never know. It’s a mystery! At least they didn’t charge us for those as well. Oh, but there’s a catch. You get only one tiny glass of soft drink (only Coke and Sprite, mind you) and we’re not allowed refills. Wow. Tight budget much? At that point, I was ashamed to even be there, but I stayed on, since I had already invested over two hours of my life and was starving. We expected food to be served any minute.

When the first course of three mini-dishes arrived, we were delighted. It looked beautifully presented. It looked like it took hours to put everything into place, and it tasted that way too. Cold and dead.

Ten piece of “sushi” (that frankly tasted like raw cabbage and bland mush) to serve 12 people.

After sampling the cold food, we waited for our next course, which turned out to be two types of supermarket-grade sushi. Brilliantly, there were only 10 pieces of each to feed the table of twelve. There was a slight difficulty allocating each of us with 83% of a slice of sushi each, as I had forgotten my calculator and was too hungry to realise that my phone could be used as a calculator.

Then we were served dessert, which was iced cake. I’m pretty sure cake’s not supposed to turn out more chewy than a Snickers bar, but hey, what would I know?

Food will not be served as expected, at all.

That was pretty much all we were served. I began recalling all the food we had shot before the dinner. We had shot a number of dishes which we weren’t served. When the chef started describing the “quality” of the dishes that they didn’t serve us, it became immediately clear that they had expected us to write about food that they didn’t even bother letting us taste.

Oh, let’s not forget the peculiar mocktails. That’s right mocktails. No alcohol. Ovo is a restaurant, bistro and bar. A bar . Mocktails? Are you shitting me? Nevermind that they came with almost all the same name – ” [insert adjective here] love”, but they mostly tasted strange. Actually, I was pretty much the only one who didn’t absolutely hate any of the mocktails. Oh, but no charge for those! Phew !

For the first time, I left a food review feeling absolutely raped, and worst of all, still hungry. The group split as we separately went in smaller groups to have our actual dinner. I paid RM3.50 for better service, better food, less waiting time and larger quantities nearby. That was the saving grace of the food review, and we went back with a smile, thanks to Ah Keong, the yong tau fu seller.

So as I was saying: Dear restaurateur, please exercise some form of professionalism, etiquette, and – need I say? – basic manners.

Manage expectations. If you invite a guest to order any drink they want, you’re buying. If a guest erroneously assumes booze is on the house – dare I ask – buy them a first round and remind them that one is the limit. Be clear on the format and never mislead. Bonus points for fully disclosing the format so that everybody knows what to expect.

Don’t. Be. A. Miser. If you can’t even refill soft drinks, you may as well charge us for using your wash basin and toilet. It’s not your finest wine from the cellars. Please, it would also help tremendously if you at least feed us well, especially after keeping us waiting. If your food is bad, that’s a quality issue which we can’t hold against you, and not an attitude problem which, if we had our way, would love to condemn you for.

Ensure food and service doesn’t suck too badly. While quality of food and service can be a gray and subjective matter, forgetting a simple order of water after three orders falls safely on the “unacceptable” territory, especially when you’re putting yourself in the spotlight.

Know that there’s no such thing as a free meal, and know that this applies to the restaurateur first, before the food bloggers. We’re always delighted to write up a restaurant if it so deserves, but never ever assume you can just toss us a menu without feeding us and expect free (and false) advertisement. It’s not gonna happen with any self-respecting food blogger. The most you will get from an overly gracious blogger is perhaps an “Oh, I ate here for free. You can try it. But I’m not saying I loved it.” Know that we have the right to not write about it at all, and know that we also have the right (and responsibility) to write honestly.

More specifically: Dear Ovo, I’m sure you expected a write up. Granted, not exactly how you expect it to be, I’m sure, but I’ll tell you now, neither did I. I’ll be sure to recommend you to anyone I feel vindictive towards.

What Kind of New Newborn Baby Solutions That You Need?

How To Protect Yourself During The Pandemic

Look for Perfect Branding Deals: What You Can Get.